Can you tell I love me some tomato and basil? It seems like it’s becoming my go-to flavor combination, especially in the summer! We’re starting to get our first ripe tomatoes on the vine (it seems a little early though, right?) so you can expect a lot of tomato recipes over the next couple of months.

When we first started following a paleo diet, I really had to up my meat and fish intake. Truth be told, I wasn’t really a “meat” person. And really, I’m still not exactly. Don’t get me wrong I like to eat it, but when it comes to handling anything but a clean boneless, skinless chicken breast I tended to check out. Brad always handled the meat. (Ha, ha, ha.) He’s in fact great at it, so I always tend to leave it to him.

But a nice clean cod fillet? I got this! 🙂 The inspiration I had for this dish actually came from shrimp scampi. It was (and still is) one of my favorite meals growing up. Whose mouth doesn’t start to water thinking about buttery, garlic-y goodness? Those were the flavors I wanted to replicate and felt would hold up to the cod. So basically I started off with butter and garlic and realized I was going to need to add something else to the pan to create a bit of pizzaz. I had some cherry tomatoes on the counter I needed to use up so I halved them and dumped them in. I also had a bit of basil left in the fridge and added that. The freshness of the tomatoes and basil cut through the butter and garlic, perfectly balancing out the flavors. I’ve also used cilantro when I was out of basil and that paired equally as well.

I have to confess, sometimes I feel stupid posting recipes with so few ingredients and such simple directions. But the truth of the matter is that I want to show everyone how easy (and delicious) eating real food actually can be. The beauty of this recipe is that you don’t need a million ingredients, a fancy technique or two hours to make it. The most time consuming part is slicing the tomatoes and chopping the basil. I’m pretty sure I could whip this up quicker than I could make some boxed mac and cheese and chicken nuggets. Or it would be pretty close!

One of my favorite ways to serve this is over mashed cauliflower (or mashed potatoes if you choose). The garlic butter soaks up into it creating some major deliciousness. 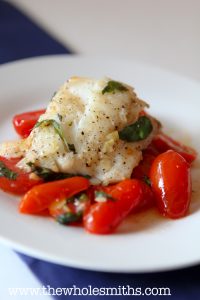 1 C. cherry tomatoes sliced in half

salt and pepper to taste

In a large skillet heat butter and olive oil on medium or medium high heat until butter is melted. Add garlic to skillet and cook for about 2 minutes constantly stirring ensuring it doesn’t burn. Salt and pepper each side of your cod fillet and add to the hot pan. Add cherry tomatoes and basil to pan. Cook cod on each side about 4 minutes or until you get a light golden crust on it. Cod will be flaky but cooked through. Tomatoes should be soft and juicy by this point.

27 shares
Previous Post: « Pineapple, Queso Fresco & Mint “Caprese”
Next Post: Chimichurri Sauce »
Note: I only work with companies and products that I feel passionately about and that align with the Whole Smiths’ views and that this post contains sponsored content. While I am compensated for the work I do, my opinions and bad jokes are always 100% my own.