This healthy Potato Salad recipe is brought to you in partnership with Sir Kensington’s. This creamy Mexican chipotle potato salad is the perfect clean dish for any gathering. Paleo and Whole30* options are available too! 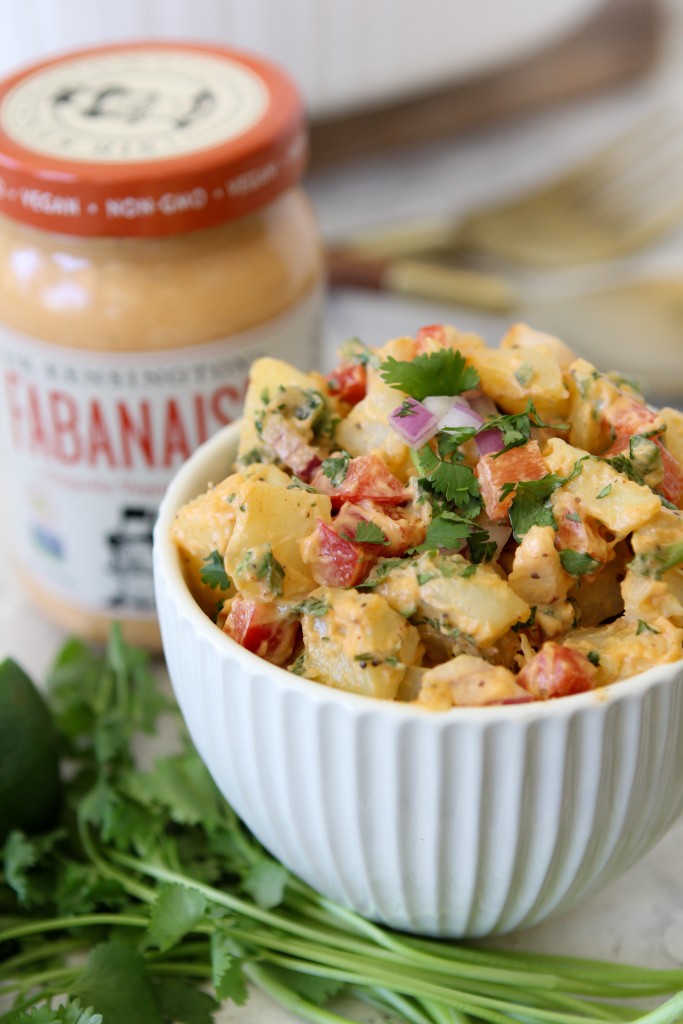 Yes, yes, yes! Yes to all of this. I have always loved me some potato salad and one of my most favorite flavors in the whole world is chipotle. So when I was given the chance to marry the two together and reinvent our traditional potato salad I may have done a happy jig.

However delicious you may be imagining this combination, it’s that good plus more. When making it, I wanted to swap out some of the other more traditional ingredients in favor of a more Hispanic/Latin/Mexican flavor profile.

So out went the celery, dill, and pickles and in went the poblanos, red onions and cilantro. In fact, I may just nominate this recipe to be the official recipe of May as it can cover both Cinco de Mayo AND Memorial Day.

Start by boiling the potatoes until fork-tender, then let them cool down before peeling and dicing them. Stir together the chipotle mayo, garlic, lime juice, salt, and pepper.

Now toss the potato dice with the mayo dressing. It’s ok if they are still warm. Mix in your diced onions, chopped cilantro and poblanos, and red bell peppers. Toss to coat and season with salt and pepper to taste.

Which mayonnaise shall I use for this healthy potato salad?

It’s inevitable, whenever I post something “mayo” related I have someone asking me if there is an egg-free version that I recommend.

In fact, I didn’t realize how many people avoid eggs for a variety of reasons. Until now, I always replied no. I know there are vegan / plant-based mayonnaise substitutes available out there but in my mind I’ve always referred to them as Franken-Mayos.

Maybe it’s just me, but I don’t think Silicon Valley is the best place to be developing food. 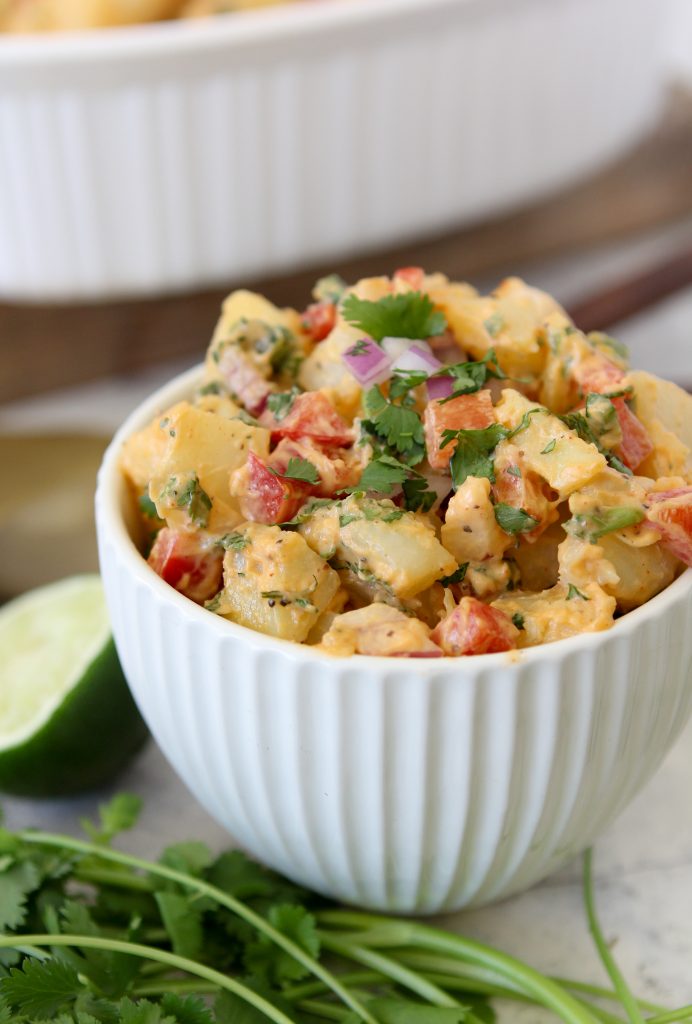 As you know, I’ve always been a fan of Sir Kensington’s all natural Non-GMO product line so when I saw that they had debuted a new egg-free mayonnaise they call “Fabanaise” at ExpoWest this year, I was intrigued.

First off, let me say their booth was the belle of the ball at Expo. They were sampling their Chipotle Fabanaise with freshly made steak fries. Like they were actually frying them up in the back of their booth! Hello brilliant.

Every time I walked by their booth it was packed, I have no idea quite frankly how they kept up with the demand for those fries in that booth but they did and they rocked it.

Not only was their booth brilliant in my mind but the product was amazing. It tasted JUST like their traditional chipotle mayo that I’ve always been a fan of. A closer look at the ingredient list was also incredibly refreshing.

It was still made with real food and not laced with a million chemicals. The secret to their egg replacement is what they call “Aquafaba”.

Essentially it’s the liquid you would get from a can of chickpeas, apparently, it makes a great egg substitute… who knew!

Now I can finally say that I have an egg-free mayonnaise substitute to recommend to everyone. You can find it in select Whole Foods and online at the Sir Kensington’s website, where you can download a coupon for your next purchase!

Can I make this Mexican potato salad recipe Whole30 compliant?

If you are looking to make this recipe Whole30 compliant please note that the Chipotle Fabanaise is not compliant but a great option for your Food Freedom.

To make it compliant simple use you Whole30 compliant mayonnaise, add two cloves of finely minced garlic and 1/2 teaspoons of chipotle powder. Salt to taste and add a bit more chipotle powder if you’d like additional heat.

Potatoes are a good source of complex carbohydrates, fiber, potassium, vitamin C, and magnesium. There is also some evidence that white potatoes contain phytochemicals, which are helpful in preventing blood pressure problems and heart disease.

For those reasons, some people do eat potatoes on the paleo diet.

To sum up, potatoes are not paleo. However, there is some debate about how strictly this rule should be followed. The point is,  that it is up to you – either potato is fine to eat from a nutritional standpoint. They are a great form of delicious carbohydrate.

There is no need to fear the white potato. However, you can make this potato salad recipe with sweet potatoes. 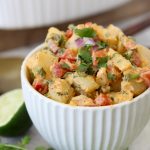 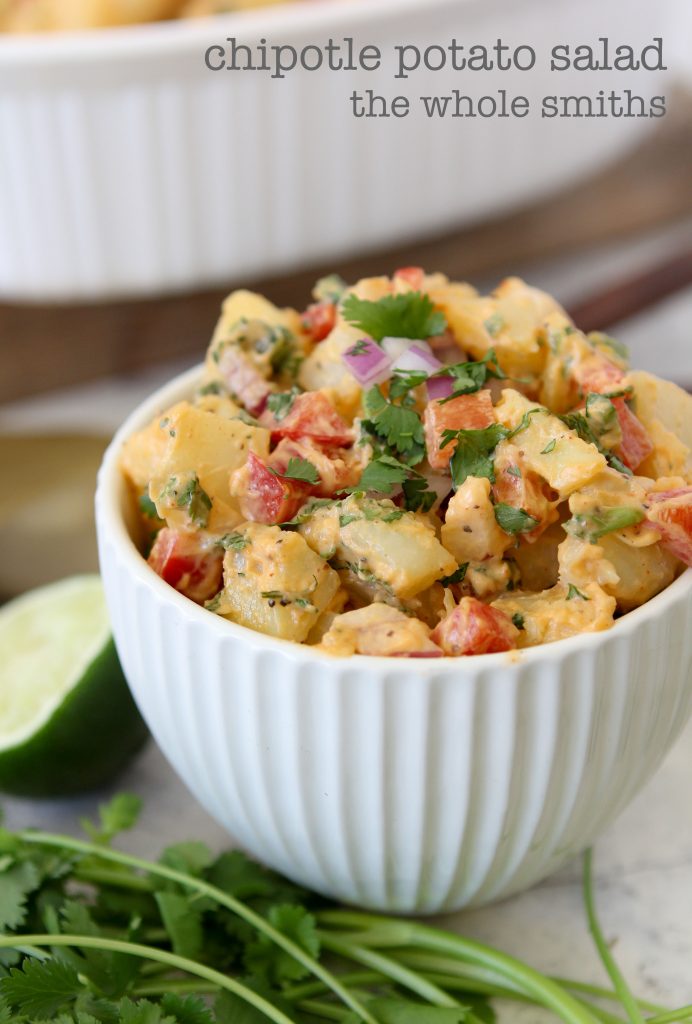 260 shares
Previous Post: « Apple + Almond Butter Sandwiches
Next Post: Avocado Chocolate Mousse Parfaits »
Note: I only work with companies and products that I feel passionately about and that align with the Whole Smiths’ views and that this post contains sponsored content. While I am compensated for the work I do, my opinions and bad jokes are always 100% my own.