I get asked so often why I eat the way I do. Or I get a funny look when I decline a delicious looking cookie or cupcake. Trust me, I DO want to indulge but more often than not these days I can stick to my guns and remember how I feel after I eat something processed and / or sugary. And it’s not good.

The truth of the matter is I haven’t chosen to follow a paleo diet simply to shed some pounds (although it is a wonderful side effect!). It pretty much came down to me having no other option. For as long as I can remember I’ve suffered from some sort of digestive issue. And don’t worry, we’re still getting to know each other so I’ll spare you any details! 😉 After I had my girls, they got worse. I’ve seen the doctor several times and most recently left with a prescription to get exercise and drink more water. An interesting prescription for someone who just ran their first half marathon… *rolling my eyes*

So I took to the internet and found so many people in my same situation. Along with that came so many people who had healed their gut through cleaning up their diets. At first I poo-poo’d that. In hindsight it was probably because I couldn’t fathom giving up my string cheese or ice cream or chips. Pick your poison. But the results were undeniable. People were feeling and looking better than ever.

Once I started reading more about the Paleo Diet and the science behind it, things started to click and make sense. So after trying to cram as much crap into my mouth while I still could this December, we switched our diets over in January.

The first few days were awful, I’m not going to lie. I had horrible a headache, felt tired and was achey. It was my body’s reaction to not getting the sugar and junk my mind was programmed to need. After a few days that subsided and I felt great!

Since then, my energy has been way up, my skin is looking better than it ever has and I have lost about 13 pounds and *almost* 2 sizes. I have had days when I don’t eat perfectly. And it holds true that if I cheat a little, I’ll do it again later that day. It’s easier for me to just to stick to the program.

On to this weekend. We originally planned to head up to Donner Lake for the long weekend Thursday. Camryn was to finish her last day of pre-school and we were going to head up. That was, until I awoke at 4:30am with unbearable stomach pains. I knew what was to come as this had happened just two weeks earlier. I spent the next day writhing in pain and violently ill. Again, I’ll spare you all of the details. But for the day I was bed ridden, barely able to stand and had to miss my little girl’s last day of school. I was in tears, she was in tears. Fortunately, I have a wonderful mom who left work ASAP to take her and saved the day for her sweet granddaughter.

All I could manage to eat that day was a banana and a couple of gluten free crackers. While I was nowhere near 100% the next day we headed up to the lake. For the first couple of days I did well sticking to my food plan. But as the weekend drew on and my stomach was still uncomfortable and I said, “What the hell, I feel gross anyways, I can have a few goodies”. Well, I did have a few goodies* and my stomach still hasn’t forgiven me as I look like this: 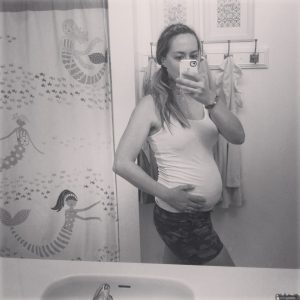 And NO, NO, NO. I am NOT pregnant. For certain. It’s what happens when I fall off the wagon and eat processed, gluten-y or sugary foods. I can get away with a little here and there, depending on what it is. But THIS is why I have chosen to eat the way I do. Yes, I feel amazing when I eat clean. But more than that, I don’t feel awful for days.

I contemplated wether or not to show anyone this picture because quite honestly, it’s not flattering. But because I feel it illustrates the effects of poor food choices for me and so many others, I’ve decided to post it.

I’m still not sure what has caused my recent bouts with sickness (though I have my suspicions) but will hopefully have answers soon. In the meantime, however, I will plan to stick to clean eating and feeling better!

*Goodies as in a Salted Caramel Gelato Guinness Float which was so amazeballs (yes, I just went there) that I might have to post it for all of you who can fully enjoy it.

0 shares
Previous Post: « pineapple broccoli slaw
Next Post: Whole30 Mango + Jalapeño Chicken Meatballs »
Note: I only work with companies and products that I feel passionately about and that align with the Whole Smiths’ views and that this post contains sponsored content. While I am compensated for the work I do, my opinions and bad jokes are always 100% my own.